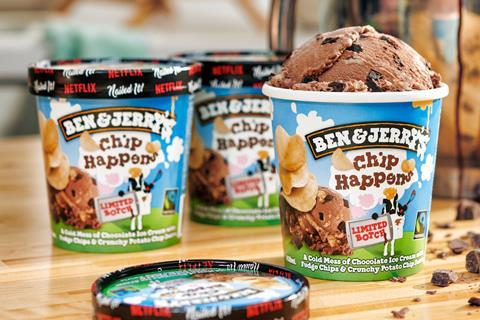 It aims to please fans who love to dunk their chips in chocolate milkshake, the supplier said

It will hit Asda this month (rsp: £4.50/465ml) before rolling out to other retailers from September.

Ben & Jerry’s owner Unilever said the flavour aimed to ”please fans who like to dunk their chips in chocolate milkshakes”.

It’s the lates in a series of collabrations with the video streaming service, having launched its Netflix & Chill’d SKU - a peanut putter, fudge and pretzel combination - in January and a space-themed Boots on the Moooo’n flavour - complete with fudge cows, toffee meteor clusters and a sugar cookie dough core - last week.