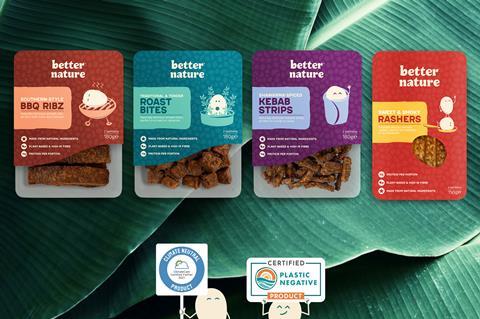 The business, which in March pulled in £1.6m via a Seedrs campaign, has created a quartet of new flavours at a lower price it said would help lure a wider range of shoppers to the plant-based category.

They were “highly nutritious and packed with protein and fibre to support a healthy diet and lifestyle”, said the brand, as well as having been “reviewed on their carbon footprint by UK sustainability startup Foodsteps, receiving the highest possible A rating”.

The new SKUs would also be carbon and plastic negative, said Better Nature, meaning they ”offset double what they produce”. They were all designed to be prepared in roughly five minutes, meaning “even those with a hectic lifestyle don’t need to compromise on nutrition”, it added.

The launch was “a result of our ongoing mission to make a plant-based lifestyle more accessible and enjoyable, by removing the need to compromise on either taste or nutrition”, said the brand’s co-founder Fabio Rinaldo.

The range will roll into Amazon and The Vegan Kind from 1 June. The Sweet & Smoky Rashers will also be available through meal kit brand Mindful Chef as part of its healthy vegan recipe subscription from June.

The brand originally set out to raise £1.3m when it kicked off its latest crowdfunding campaign in March, but hit that target within three hours of a private launch, going on to raise £1.6m.