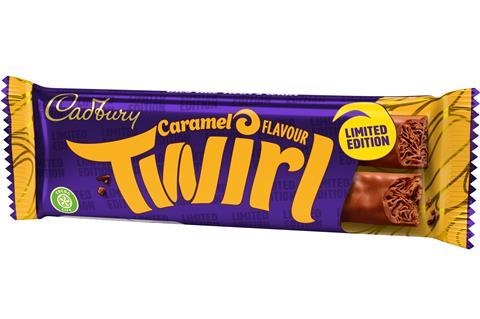 The bars, which blend the Cadbury staple’s chocolate with caramel, have hit stores this month, backed by a major out-of-home campaign (rsp: 69p/43g).

To mark the launch, the brand hid a series of adverts around the UK, such as the side of the River Thames, so they would only be viewable at low tide, as well as on a remote island off the coast of North Wales with a population of just two people, offering those who spotted the ads a chance to try the bars.

The rollout of the bars will be further backed by PR, digital and social media activity, as well as in-store PoS materials.

It marks the latest in a series of moves from the chocolate giant this year.

February, for instance, saw Cadbury roll out ‘twist and seal’ packs across its Cadbury Duos range in a bid to “promote healthier snacking”.

Prior to that, The Grocer revealed it was potentially eyeing the launch of a range of Mega Buttons, after it applied to register the name as a trademark with the Intellectual Property Office.

Read more: 10 launches that show chocolate orange is still the flavour of the moment