Cow & Gate adds fish to stage one in babyfood shake-up 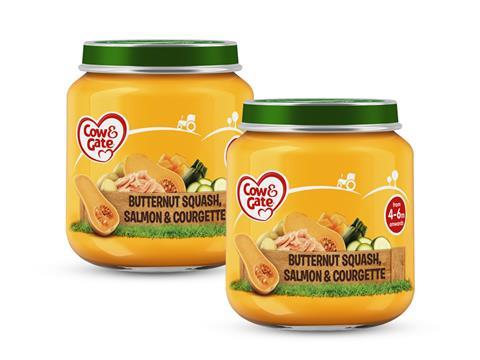 Danone is poised for a major overhaul of its Cow & Gate babyfood brand that will see fish introduced to stage one feeding in what the supplier claims is a category first.

Other NPD across pouch, pot, tray and bag formats has been created to help parents introduce new flavours and textures into the baby’s diet. They include a mango, spelt & Greek-style yoghurt pouch for stage one, multigrain porridge with oats & barley for stages one and two, and a stage three tray of paella with vegetables, chicken & fish (rsps: 70p-£2.39). New packaging “inspired by nature’s colours” will have more green in the design and feature images of ingredients.

Danone has also reformulated its Aptamil lineup of breast milk substitute. It will roll out in fresh packaging from late June with the “most advanced formula yet”.

In the planning for more than two years, the revamp marked “the biggest changes the category has seen for over a decade”, according to Lorman.