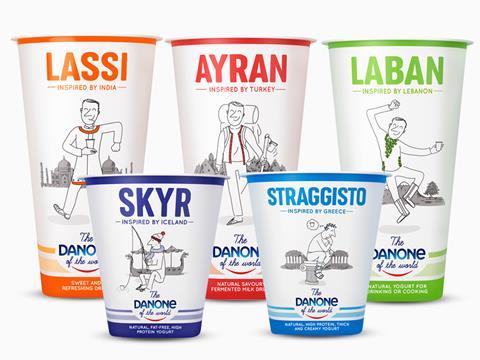 Danone has launched a range of globally influenced yoghurts and fermented milks under a newly created ‘Danone of the World’ brand.

The French-made range went on sale exclusively in Ocado at the end of June and includes an Icelandic-style Skyr; a Turkish-inspired Ayran drink; a Greek-style Straggisto yoghurt plus an Indian-inspired Lassi drink and a Lebanese-style Laban yoghurt (rsp: £1-£1.50 each).

It is the first piece of NPD to be brought to market by Danone’s new Innovation Incubator, which launched in the UK six months ago. The incubator will bring some of Danone’s most popular ranges from overseas markets to the UK, in addition to creating new products designed specifically for British tastes.

Danone of the World is already available in France as Danone du Monde, and in Italy as Danone dal Mondo, and was inspired by “authentic recipes from regions around the world with a rich history of yoghurt making”, the brand said.

“We’re incredibly proud of this range and delighted to bring it to the UK market,” said Danone Innovation Incubator director Corinne Chant.

“Yoghurt has been recognised for centuries across many cultures as a delicious food source. We wanted to share this rich heritage with UK consumers, taking inspiration from some of the world’s best yoghurt recipes.”

The new range was designed to tap increasingly diverse consumer tastes for dairy and interests, Chant added. “This is a real market growth opportunity for retailers, as it reminds us all of the unique heritage of the category and aims to promote diversity and open the doors to yoghurt consumption for consumers.”