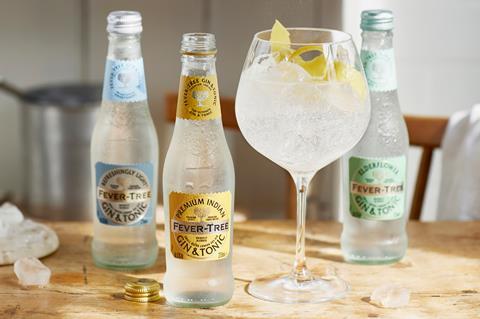 They hit Tesco from 20 May

Fever-Tree is to launch its first alcoholic drinks - a trio of branded gin & tonic RTDs, The Grocer can reveal.

The tonic giant worked with London-based Thames Distillers to create its own gin, which it has mixed with its core tonic, elderflower tonic and ‘Refreshingly Light’ tonic for three 275ml bottled drinks.

The range “provides consumers with a convenient way of enjoying a perfectly paired G&T without having to compromise on quality,” said Fever-Tree senior innovation manager Rose Cottingham.

It had “been inspired by our favourite flavour combinations and reflects the same commitment to the highest quality ingredients, botanicals and taste that is at the heart of all of our products”.

Yet despite having created its own gin for the launch, it is understood there are no plans to launch the spirit itself as a standalone product.

It comes amid a flurry of NPD in the RTD sector over the past few months. However, most of the action has been in cans rather than bottles.

Big spirits players such as Sipsmith and Goslings have launched their own premixed RTDs since the year began, while many wine brands are launching lighter varietals and ‘spritz’ style drinks into 250ml cans too.

Even the big brewers are looking to cash in - Asahi UK kicked off the year by pouring its posh Italian lager Peroni into ‘slimline’ style 330ml cans it hopes will appeal to younger shoppers.