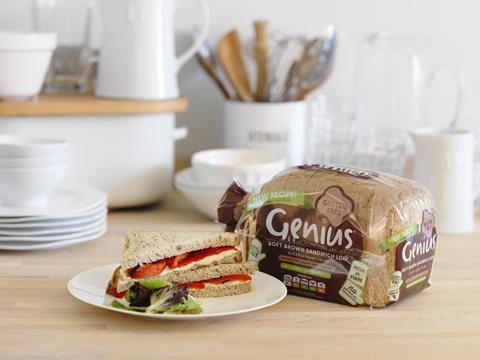 Free-from brand Genius is rolling out new recipes across its bread range.

The business said it had spent two years developing the new recipes to offer superior taste and nutritional credentials. Omega-3 has been added to the brown and seeded loaves, and calcium and iron to the white loaves to align them more closely with traditional bakery products, while the fat level has been reduced and fibre content increased.

Genius, which said it did not expect the revamp to affect retail prices, has started rolling out white and brown loaves using the new recipe and these will be followed by the brand’s seeded loaf and rolls.

The launch is being supported by digital activity and a 55-day sampling campaign, while packaging carries a ‘new recipe’ flash and flags up the fibre content.

“Consumers are increasingly health-conscious and we wanted to ensure we were meeting demand for gluten-free bread products with a better nutritional value,” said Genius commercial director Dave Shaw.

He added the timing of the launch had not been impacted by the high-profile recall in June of a range of free-from products produced by Genius, including crumpets, scones and pitta bread.

And he added data suggested the recall hadn’t had a major impact on wider sales of the brand’s products, with its value share of the gluten-free plant bread market up from 51.9% last year to 58.3% [IRI 12 w/e 15 August 2015].

“But we are not complacent,” he added. “We still need to rebuild the trust of consumers.”