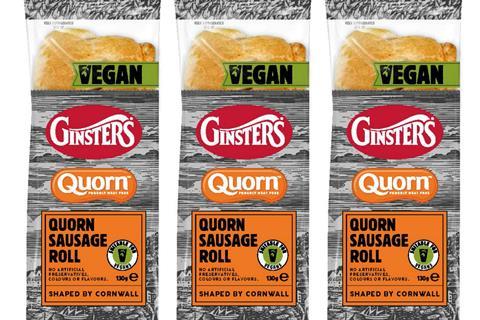 Cornwall’s Ginsters is taking on Greggs with its second collaboration with Quorn – a plant-based sausage roll.

The new chilled snack (rsp: £1.25/130g) will roll out from 15 April. The launch would “attract vegan and flexitarian consumers to the savoury pastry and chilled meat-free categories” Ginsters predicted. “Pre-family shoppers, who over-index in meat-free, offer a growth opportunity worth £5.8m.”

It marks the second time Ginsters and Quorn have worked together. In September, they unveiled Ginsters Vegan Quorn Pasty, which became “the fastest-selling meat-free pasty in grocery” according to the Cornish supplier.

Its MD Kieran Hemsworth said “55% of all consumers are reducing their meat intake, yet choice for vegan rolls is very limited”. Ginsters Vegan Quorn Sausage Roll had “been developed to close the disparity between consumer demand and market choice”.

Teaming up with Ginsters again had “been a natural – and exciting – progression” said Andy Smith, Quorn’s director of business development.

It comes after Greggs sparked headlines in January 2019 with its hugely successful Vegan Sausage Roll, made with a bespoke Quorn filling.

It was followed in September by the first plant-based range from Wall’s Pastry, including Vegan Jumbo Roll.