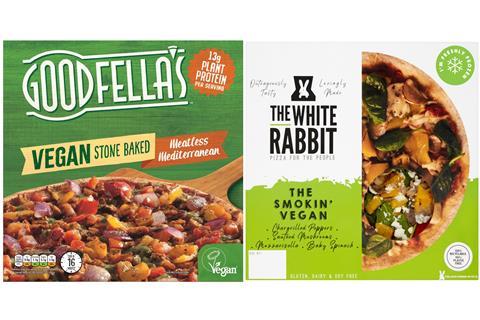 Frozen sales have surged with the outbreak of coronavirus

Brands are ramping up their frozen vegan pizza NPD as Brits flock to the freezers for lockdown shopping.

Goodfella’s has launched a Meatless Mediterranean pizza topped with Mediterranean vegetables and plant-based mince made from pea protein.

The pea protein was “a good source of fibre, rich in protein and has low-allergenic properties, unlike soy”, said Goodfella’s head of marketing Claire Hoyle.

Meanwhile, posh pizza brand The White Rabbit Pizza Co has made its frozen pizza debut with two launches: The Smokin Vegan and The Vegan Gardener.

Co-founder Nick Croft-Simon said the move felt like “a natural step in our journey” adding that it “makes sense to offer our customers options that help reduce food waste with a longer shelf life”.

It comes as frozen sales have surged across the UK with the onset of the coronavirus crisis.