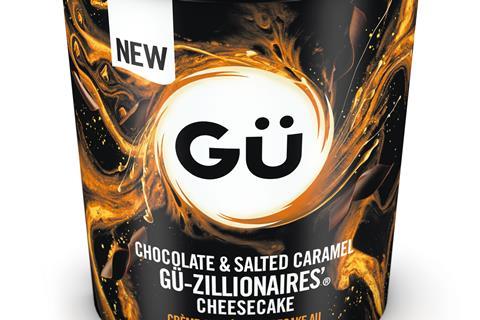 Other variants are Zesty Spanish Lemon Cheesecake and Chocolate Torte

Gü Puds has added a nine-strong lineup of NPD, which sees the brand take a second stab at ice cream and make its debut in free-from.

The premium dessert maker’s “biggest NPD pipeline yet” includes three ice cream sharing tubs inspired by chilled desserts – “one of the most exciting innovations in the brand’s history” according to Gü.

The ice creams arrive 13 years after “a low-level test launch” of a short-lived ice cream selection. Gü was just “three years old back then, and on review decided to focus on its core range” it said.

The new trio was “the one consumers have been waiting for” said the London brand’s senior innovation manager, Sam Vince. “We are confident our ice creams will make a strong impact in what is a fresh, new and exciting category for Gü.”

Also unveiled this week is the brand’s Fabulously Free range – five chilled SKUs made with ingredients including coconut cream and 70% cocoa chocolate.

Free from gluten and made without dairy, the variants include Strawberry & Rhubarb Cheesecake and Velvety Chocolate Ganache (rsps: £2-£3.50). They will be available from next month, aimed at the “43% of Brits who claim to regularly shop the free-from fixture”.

Gü’s raft of NPD is completed by Wild Blueberry & Lemon Limited Edition Cheesecake for two (rsp: £3). It will be in chillers from late March across the mults.

All innovations will roll out under new brand positioning ‘Seriously Gü’ – which “reasserts the authority of the brand as the only restaurant-quality pud of choice for ‘me time’ and ‘we time’”. The spring push will include digital outdoor, paid social, digital, PR and influencer activity.