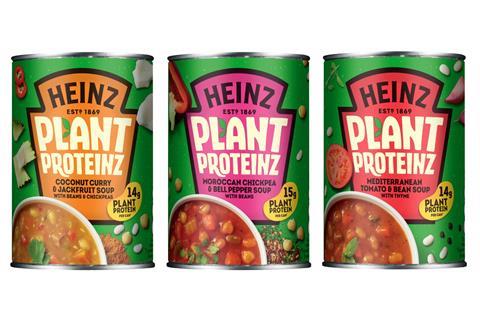 Its Mediterranean Tomato & Bean, Coconut Curry & Jackfruit and Moroccan Chickpea & Bell Pepper flavours will roll into the mults next month

Heinz is growing its plant-based offer with a new brand called Plant Proteinz.

The fmcg giant is ploughing £2.5m into the brand, which will debut with a trio of canned soups.

Each can of soup is said to provide at least 14g of plant protein and contain no artificial colours or preservatives.

The launch would help make “plant-based eating accessible for all consumers as the trend for alternative plant-based consumption continues to grow”, Wright added.

It comes as Heinz is making a concerted effort to expand its plant-based offering across the rest of its product portfolio.

In August, it quietly launched its Kumana brand of vegan, avocado-based hot sauces into Ocado, with a wider retail launch planned for 2022.

As reported by The Grocer in July, Heinz also looks set to launch a plant-based barbecue range.

It applied to register the name ‘VBQ’ as a trademark with the IPO under class 29, covering vegetarian and vegan sausages and burgers, and class 30 featuring seasonings, condiments and cooking sauces.

In January, it launched a slew of new vegan products dubbed ‘Plant Pantry’.

The NPD included a vegan version of its Salad Cream, a trio of vegan mayonnaises and its frozen Beanz Burgerz in Original and Texan flavours.