Heinz revisits carton format with Soup of the Day 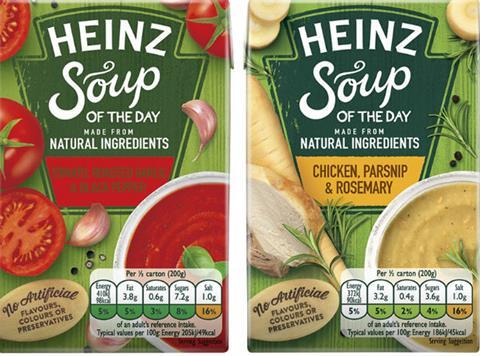 Kraft Heinz is taking another run at the carton format as it works to recoup a £23.5m value sales loss for its core canned lineup.

Soup of the Day is the first-ever Heinz wet ambient soup range in a carton, and the brand’s first soup of any kind in carton format since the chilled Farmers’ Market lineup was axed in 2009.

Rolling out at the end of July, the NPD comes after Heinz saw sales of its Classic canned soup plunge last year by 15.2% to £131.7m. The ambient soup category as a whole was also down - by 11.3% to £355.9m. However, newer formats proved popular, with carton volumes up 34.4% [Nielsen 52 w/e 8 October 2016]. While consumers “love” canned Heinz soup, younger shoppers “were on the lookout for alternative formats”, said the brand.

The “fresher tasting” range with no added sugar was in response to “consumers becoming more and more conscious of what they’re eating”, Heinz said.

The launch will be supported from 1 October by a campaign comprising TV, PR and digital.