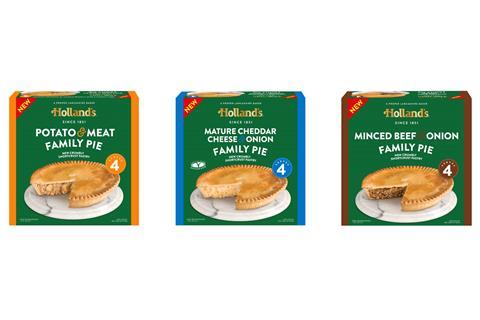 The range comprises three flavours in both chilled and frozen formats

Holland’s Pies is tapping into the growth of family meal times by adding six family-sized sharing pies to its lineup.

The new products mark the first time the Lancashire-based pie maker has ventured away from individual pies and comes as family meal occasions are on the up as a result of the UK lockdown and subsequent restrictions.

It has launched a range of six pies – three chilled and three frozen – which started rolling out at Morrisons this week followed by Tesco from 16 November, Asda from 19 October and Iceland from 23 November.

Holland’s said the lineup offered “variety and choice” for shoppers, including its “bestselling” flavour profiles, which includes the Vegetarian Society-approved Cheese & Onion SKU, made with Wkye Farms mature cheddar.

It said the pies would be “perfect for time-poor consumers looking to create a home-cooked pie, just like grandma used to make”.

The launch will be supported by a PR and social media campaign throughout the winter.