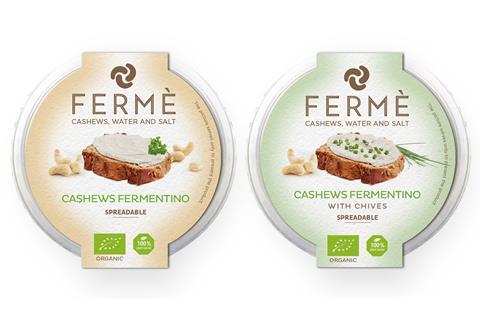 A range of seven organic, vegan cheeses went on sale this weekend. The listing with Whole Foods saw the UK became the second country to distribute the brand, ahead of launches in Spain and France later this year.

The brand was launched in Italy earlier in the year by dried fruit and nut supplier Euro Company, a B Corp headquartered in Ravenna.

The brand uses the ‘fermentino’ method, coined by Italian raw chef Daniela Cicioni, in which products are made by fermenting nuts and oilseeds and adding only water and a pinch of salt.

Fermentino was “Italian gastronomic tradition’s answer to the growing demand for natural foods of vegetable origin”, said a spokeswoman for Fermè.

“With the trend for plant-based eating showing no signs of slowing down, the time was right to introduce the UK consumers to a natural plant-based product, which is healthy, delicious and only contains three ingredients,” she added.