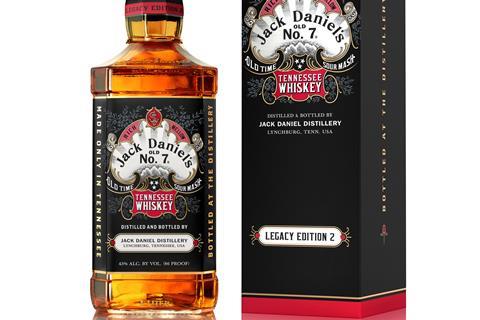 Jack Daniel’s has launched a new ‘legacy edition’ bottle for its core whiskey.

Limited-edition packs with a new design insipired by “one of the first instances of Jack’s iconic black label” will roll into Asda and specialist retailers from 12 September, with an eye to tapping gifting sales as Christmas draws close (rsp: £22/70cl).

It was an ”ode to Mr Jack’s colour of choice and is inspired by the elegant motifs from the brand’s archive”.

It’s the second ‘legacy edition’ from Jack Daniel’s. The first, a green and red bottle with gold trim, launched this time last year.

The brand is also bringing back its holiday calendar for 2019, which includes mini bottles of whiskeys from across its range of spirits, including Tennessee Whiskey, Tennessee Honey, Tennessee Fire, Gentleman Jack, Tennessee Rye and Single Barrel, as well as gifts such as shot glasses. It has also launched into Asda (rsp: £60).