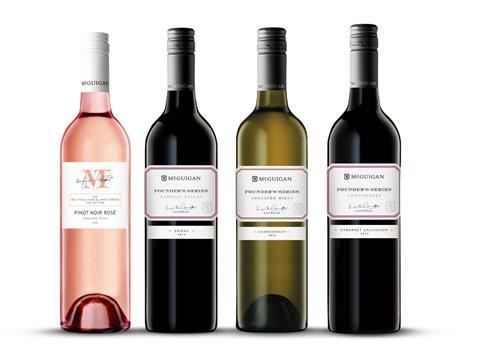 The rosé (rsp: £10) - which will be available from late June - has been launched alongside McGuigan’s Founder Series, which champions three of Australia’s winemaking regions: Barossa Valley Shiraz, Coonawarra Cabernet Sauvignon and Adelaide Hills Chardonnay.

The Shiraz and Chardonnay will roll out to Sainsbury’s in the second half of next month.

With an rsp of £10.99, the Founder Series represents a new price point for the brand, which it says aligns with market trends demonstrating growth in the over £10 category.

Chief winemaker Neil McGuigan said the wines’ “slightly higher” cost signalled the brand’s desire to “continue to take our consumers on their wine journey and demonstrate that Australia can do premium and super-premium wines that have flavour, individuality and a great deal of elegance”.

MasterChef presenter Torode has developed a series of recipes to pair with the new wines, with food matching a driving idea behind the creation of his new rosé.

“Australian rosé has done moderately well in the UK. Consumers know it’s a great drink but not necessarily good with food. We want to change that,” McGuigan added.