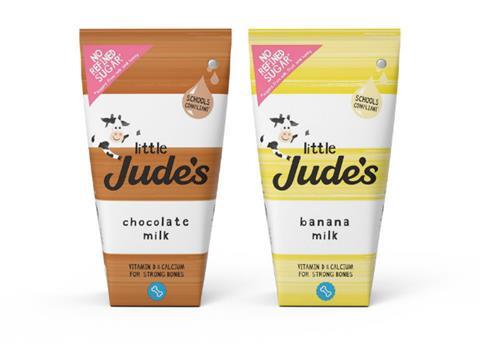 Little Judes will go on sale this month

Premium ice cream brand Jude’s is set to diversify into liquid milk for the first time with a range of flavoured fortified milks for the children’s market.

Little Jude’s UHT milk will go on sale in selected Sainsbury’s stores on 14 January (rsp: £1.25/180ml) in banana and chocolate flavoured recipes. The drinks are targeted at children over 18 months old and are fortified with added vitamin D and calcium.

They also adhere to School Food Standards set out by the DoE by containing between 64-67 calories per 100ml and 8.2g of sugar, and join Little Jude’s milk-based ice lollies which launched in September. Both products use honey as a sweetener. “Following the success of our milk lollies we realised the demand for natural, wholesome milk products for families. Flavoured milk was an obvious next step for us and we are thrilled with the results,” said Jude’s MD Chow Mezger.

Mezger has previously hit out at multinational ice cream companies for failing to lower sugar levels in their products, adding that “Jude’s is proud to be leading the way”.

A national marketing campaign including consumer events, trade shows and social media is set to accompany the launch.