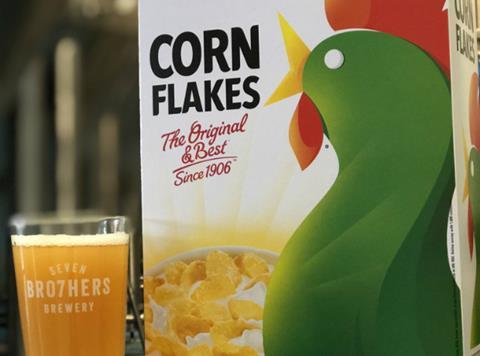 Throw Away IPA was made with 60kg of Corn Flakes

Kellogg’s has teamed up with Salford brewery Seven Brothers to turn its waste cereal into beer.

The 5% abv Throw Away IPA in a can (rsp: £2.50/440ml) is made from ‘ugly’ Corn Flakes from Kellogg’s Manchester factory – ones that are too big, too small or overcooked.

Flakes that do not pass the supplier’s quality control usually go to animal feed, but Kellogg’s had been “keen to seek out new opportunities to upcycle its food waste” and had approached Seven Brothers about the prospect of a cereal-based brew.

Iceland and Tiny Rebel launch beer made from surplus bread

Launched yesterday (4 December), the limited-edition Throw Away IPA was made with 60kg of Corn Flakes to replace some of the wheat grain in the beer mix. The cereal added sweetness during the mashing process and gave the beer a “sunshine, golden colour” Kellogg’s said.

The supplier was “always exploring different and sustainable ways to reduce food waste” said its corporate social responsibility manager Kate Prince. “So it is great to be involved in such a fun initiative with a local supplier.”

Kellogg’s was “working hard to eliminate food waste in our manufacturing processes and give our consumers the wholesome products they love with minimum impact on the planet” Prince added.

“Our approach has delivered a 12.5% reduction on food waste in our UK sites this year.”

Throw Away IPA will be available from grocery and on-trade across Manchester, with 10p from each sale donated to food redistribution charity FareShare.