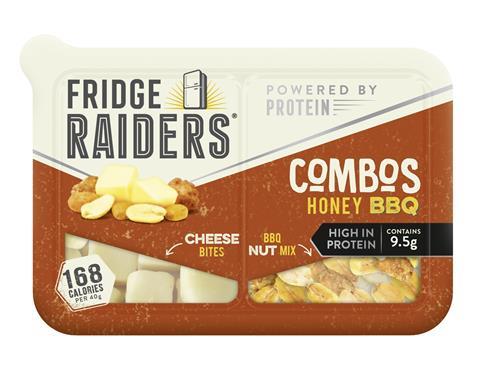 Kerry will spend £1.5m on marketing to back the launch

Its launch would be supported by a £1.5m marketing spend, including TV ads running throughout June playing on the range’s high-protein credentials. Each pack contains fewer than 170 calories.

Kerry said the new SKUs would appeal to consumers on the hunt for “better-for-you snack choices”. The brand had developed the products in response to Kantar Worldpanel data that found consumers were more likely to buy snacks because they thought they were healthy than any other reason in the year to February 2018.

Meanwhile, 75% of consumers ate nuts at least once a week, making the market worth almost £490m and in 4% growth in the year to July 2018, according to IRI.

“The convenient format can be consumed on-the-go or as a planned occasion to satisfy that hunger gap, which often strikes between meals,” said Fridge Raiders brand manager Matthew Paterson.

“We’re feeling incredibly positive about the success it will bring following a very strong reception from both consumers and retailers during research. We’ve also seen similar style snacks becoming increasingly popular in the US market, with brands such as Balanced Breaks by Sargento constantly growing, so we’re confident this trend will translate within the UK space.”