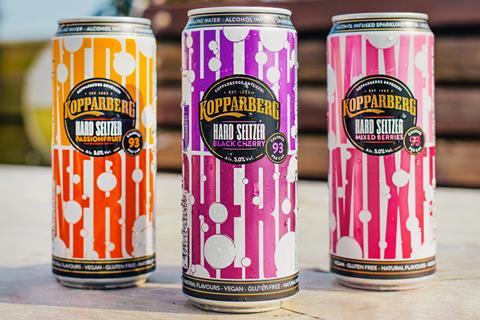 The drinks are made with KopparSpirit, an alcohol base made from fermented fruit

Kopparberg is launching a trio of hard seltzers it hopes will “redefine” the category.

They are made with Kopparberg’s trademarked ‘KopparSpirit’, an alcohol base which leaves behind no residual sugar, said Kopparberg, adding the brand made “zero compromise on taste” and “put any preconceptions of flat liquid and dull, subtle flavours to one side”.

It “delivers a far fuller flavour to anything currently available on the UK hard seltzer market”, it added.

It’s not Kopparberg’s first stab at the hard seltzer category: it launched Balans, a spin-off seltzer brand it dubbed an ‘aqua spritz’ rather than a hard seltzer, in 2019.

Kopparberg head of marketing Rob Salvesen said while Kopparberg would “no longer be actively pushing Balans” it would remain stocked in supermarkets.

“With Balans, we had the opportunity over the past year to evaluate the UK hard seltzer category, alongside our competitors and the consumer. What this time has told us is that there is an appetite for hard seltzers, but the vast majority of current brands just don’t deliver a flavour or taste that the UK consumer wants.

“Kopparberg Hard Seltzer addresses this challenge head-on and we are confident this renewed focus and our bold fruity flavour will give us a strong advantage over the current competition.”

However, competition is heating up. BrewDog launched its own spin-off hard seltzer brand, Clean & Press, earlier this month, and The Grocer revealed this week US hard seltzer giant White Claw is to make its UK debut from 1 June.