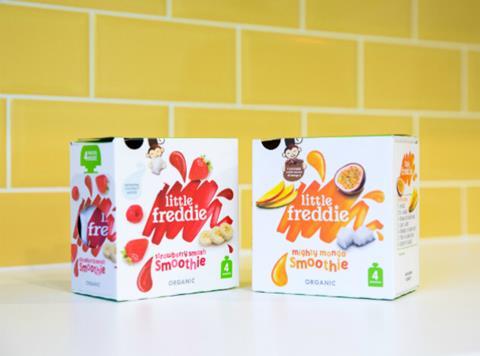 Little Freddie smoothies are aimed at toddlers and pre-schoolers

Little Freddie, the fast-growing babyfood brand, has expanded its portfolio with its first smoothies – promising 30% less sugar than rival lines on average.

The two-strong organic lineup of Mighty Mango and Strawberry Smash (rsp: £4/4x90g) contain around 8g of sugar per 100g. For comparison, Ella’s Kitchen smoothies have as much as 15.2g per 100g.

Available from this week via Ocado, Amazon, Boots and Littlefreddie.com, the new duo is aimed at toddlers and pre-schoolers.

It comes seven months after Little Freddie – founded in 2013 in China by British financier Piers Buck – made its UK debut in April with 10 pouched lines. The babyfood maker has since added several more products, including a no-lactose yoghurt and two high-protein stage two meals.

In October, it teamed up with recycler Enval for its Big Green Plan sustainability initiative, which will see Little Freddie aim for zero waste to landfill from its pouches – in what it claims is an industry first.