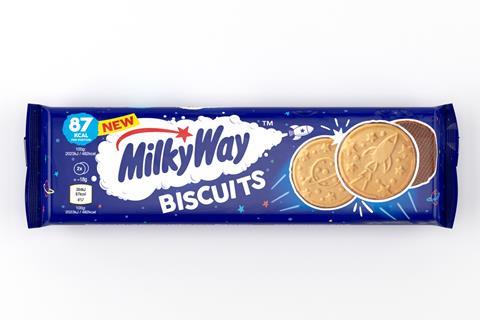 Mars is expanding its Milkyway brand into biscuits for the first time.

The confectioner has created a range of vanilla-flavoured biscuits dipped in chocolate. Each is embossed with one of four “fun outer space designs”.

They are being manufactured for Mars by Burton’s Biscuit Company, which has worked with the chocolate giant on previous biscuit launches, such as its Galaxy Chocolatey Moments and Maltesers Biscuits.

Milkyway Biscuits will roll into B&M on 1 September, with a further listing at Asda to follow later in the month (rsp: £1/108g).

Each serving of two biscuits weighs in at 87 calories.

Mars chocolate drinks and treats general manager Michelle Frost said she was “confident that a combination of the brand strength, competitive price point and fun format will create some real excitement and attract new consumers to the biscuits aisle”.

It comes on the back of a strong year for the Milkyway brand, whose confectionery grew by 9% in retail last year, according to Kantar data [52 w/e 18 April 2021].

Over recent months, Mars has made concerted efforts to expand its well-known confectionery brands into the biscuit category through its ongoing tie-up with Burton’s Biscuits.

Last January, it rolled out Maltesers Biscuits, which comprise of three “malty bobbles” per biscuit, filled with “crisp honeycomb pieces” and coated in milk chocolate.