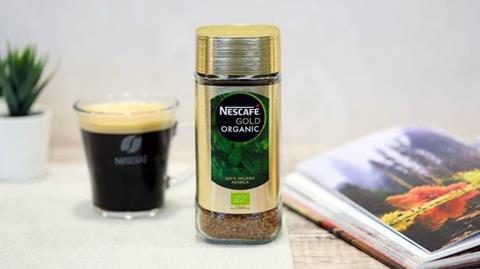 The new instant coffee is made from 100% organic Arabica beans

Nestlé has unveiled the first organic variant for its Nescafé range of instant coffee.

Made from 100% organic Arabica beans, Nescafé Gold Organic is available now in Sainsbury’s as part of Nestlé’s efforts to grow the number of organic options across its global portfolio.

The new premium coffee (rsp: £4.49/95g) provided “a smooth, fruity flavour with notes of sweet and sour citrus fruits, alongside the reassurance many get from selecting organic” said the food and drink giant.

Demand for organic products continued to grow in the UK, said Neil Stephens, head of Nescafé UK & Ireland. It was “a big factor for many consumers, particularly those interested in the environmental benefits of going organic. I’m delighted to be able to share this premium innovation with the UK’s coffee drinkers.”

The launch comes after Nestlé relaunched Nescafé Gold in March 2018 with a new formulation, packaging and messaging.