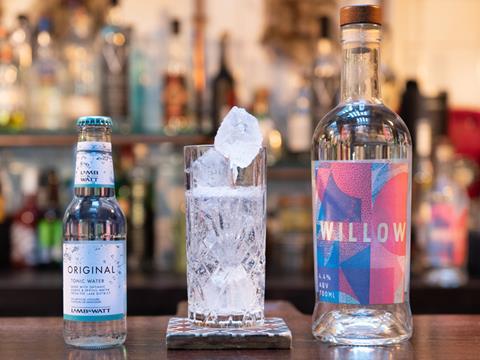 Willow is made with a calvados base, pineapple, star anise, cherry tomato, kaffir lime and agave syrup

The owner of a London cocktail bar has launched his own low-alcohol spirit, Willow.

William Borrell, owner of the Ladies & Gentlemen bar in Kentish Town, created the 4.4% abv drink to provide a more affordable alternative to many of the recently launched ‘no-alcohol spirits’ drinks hitting the market, and to appeal to those who don’t want to cut out booze entirely.

It is made with a calvados base, pineapple, star anise, cherry tomato, kaffir lime and agave syrup.

Borrell said: “There’s obviously a boom in no/low alcohol spirits. I don’t have much time for most of the former, as I think the notion of no-alcohol ‘spirits’ is a con - especially as the prices are outrageous and the production methods opaque. To be frank, I’d rather just buy a decent soft drink.

“However, there’s clearly a role for low-alcohol spirits, and Willow is designed for those wanting all the cues of alcohol with a depth of taste.”

It is available from London-based wholesaler Chalié Richards (rsp: £16/70cl).