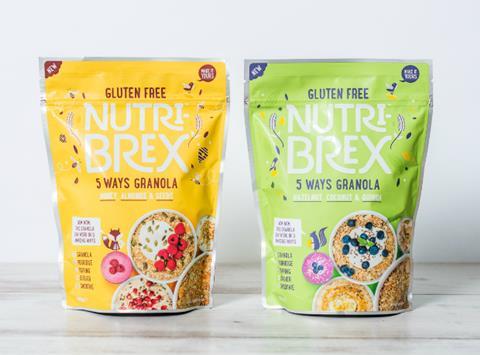 Life Health Foods is taking Nutri-Brex beyond Weetabix-style cereal for the first time.

The free-from breakfast brand has unveiled 5 Ways Granola, an oat-based lineup promising an average of 7.1g of fibre per 100g and just 6.9g of sugar. Packed in a resealable bag format, the two variants – Honey, Almonds & Seeds, and Hazelnut, Coconut & Quinoa – are intended to have five uses: cold cereal, porridge, bircher, smoothie and topping (rsp: £3.49/400g).

The NPD, set to be supported by multi-channel campaign, came in response to consumers increasingly opting for free-from breakfast alternatives for health and lifestyle reasons, said the supplier’s CEO, James McMaster. “The mainstream cereal category is in value decline, while free-from cereal is growing at 27%, with Nutri-Brex being a key driver,” he claimed.

Initially available in the health food channel, before launching in grocery later this year, 5 Ways Granola marks the first launch since Life Health Foods announced a rebrand of Nutribix as Nutri-Brex last summer, to take the brand’s options beyond its original cereal biscuit.