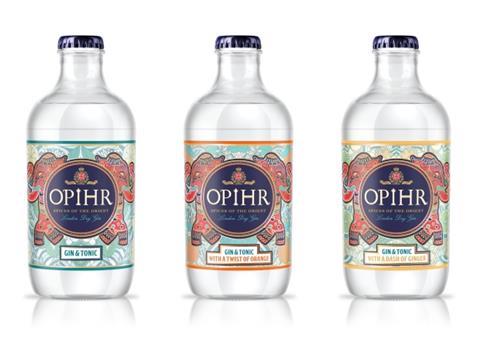 The NPD was “an exciting development” for the brand, said owner Quintessential Brands’ UK marketing director Russell Kirkham. It presented “adventurous consumers with a new, convenient way to enjoy our distinctive gin”.

The launch marks Opihr as the latest in a line of gin makers to set their sights on growing in RTDs. Edinburgh Gin added two canned cocktails just last month, while Diageo moved in February to replicate the storming success of Gordon’s Pink with canned Pink Gin & Tonic premixes.

It comes as Brits have bought almost 55m bottles of Mother’s Ruin over the past 12 months, splashing out around £1.5bn on the category, according to the latest WSTA figures. That’s a 38% hike in value for gin, with volumes up a third (33%). Quarterly combined value sales of gin across the on and off trades were up more than 40% for the first time ever over Q1 2018, said the WSTA, with sales up 44% compared to the same three months the previous year.

Opihr has partnered with Isle of Wight sailing regatta Lendy Cowes Week to become its official gin from 4-11 August. The tie-up will see Opihr run a branded bar on the island’s Cowes Parade, and deliver RTDs to competitors by boat.

The brand has also signed up British sailor Alex Thomson as its first global brand ambassador. He will represent the gin at special events during Lendy Cowes Week.