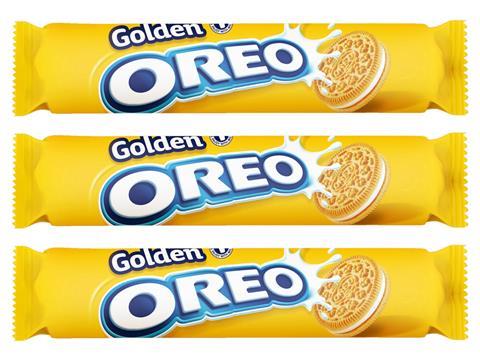 Mondelez is expanding its booming Oreo brand with its first flavour variants in the UK.

The supplier is next month launching 154g packs of Golden Oreo - a non-chocolate biscuit with vanilla filling - and limited-edition Oreo Peanut Butter to tap the soaring popularity of the spread (rsp: £1.08). Golden Oreo is a permanent extension while Peanut Butter - rolling out as UBUK launches a peanut cookie (see below) - is to be replaced with another limited edition in 12 months.

The launches come as sales of the brand soar 21.6% year on year to £31.2m [Nielsen 52 w/e 16 May 2015]. Mondelez biscuits marketing controller Rick Lawrence said 40% of Oreo growth was incremental to the biscuits category and it was hoping to drive further incremental growth with the NPD.

“Oreo is the world’s number one biscuit brand and we learn a lot from our businesses around the world,” he added. “If you look to other markets like the US there comes a stage in a brand’s life when flavour variants are a great way of growing sales and exciting consumers.”

Lawrence said Brits aged over 55 were core consumers of biscuits and that Oreo had succeeded in appealing to younger shoppers. “It is recruiting consumers to the biscuit category who would not, or would only rarely, buy into the biscuits category,” he added. Oreo has also been a hit in licensing terms, with R&R Ice Cream producing Oreo ice cream sticks, tubs, cones and sandwiches, and Mondelez enjoying great success with Cadbury Dairy Milk Oreo chocolate. And flavour extensions opened up new opportunities for licensees, said Lawrence. “As a licensed ingredient, Oreo is a very attractive proposition and licensing helps drive the presence of the brand.”

The new flavours will be supported by a £2.1m marketing spend including a dedicated TV for Golden Oreo, video on demand, social media, sampling and major in-store activity. “Our retailers are really excited about the launch and getting behind it,” said Lawrence. “They have seen the incrementality of the brand and have seen how good it is for the category.”