Pernod Ricard to distribute La Hechicera rum in the UK 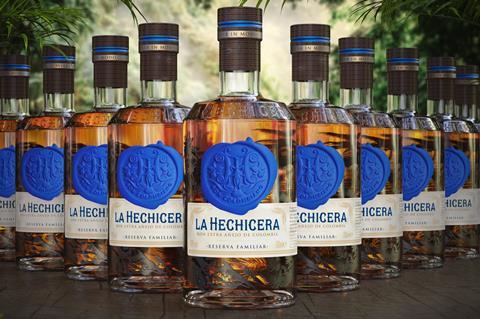 La Hechicera translates into English as ‘The Enchantress’

Pernod Ricard has inked a deal to distribute posh rum brand La Hechicera in the UK.

Its name translated into English means ‘The Enchantress’.

The core rum (40% abv) offered “a blend of fine aged Hispanic-style rums, matured in former bourbon barrels made of American white oak”, said the brand, with “a heady scent of toffee and orange peel on the nose, and distinctive notes of tobacco and roasted coffee on the palate” (rsp: £45/70cl). It has rolled into Ocado, Amazon, Master of Malt and The Whisky Exchange.

It will join Pernod’s Enterprise Brands portfolio, through which it hoped to “identify and incubate the next generation of cult spirit brands for future growth”, said Pernod enterprise brands controller Mark Makin.

“The brand was “is already popular among rum enthusiasts, and its unique craftmanship makes La Hechicera one of the most exclusive high-end rums. The golden rum category is growing 8% and our ambition is to capitalise on this momentum by expanding distribution of La Hechicera within the UK to recruit new consumers.”

It comes as Pernod this month also kicked off a revamp for its non-alcoholic spirits brand Ceder’s to coincide with Dry January, rolling out new packs and mounting a marketing push aimed at breaking “the stereotype of how January is perceived and get everyone to ‘Live Free Spirit’ for the month and beyond”.