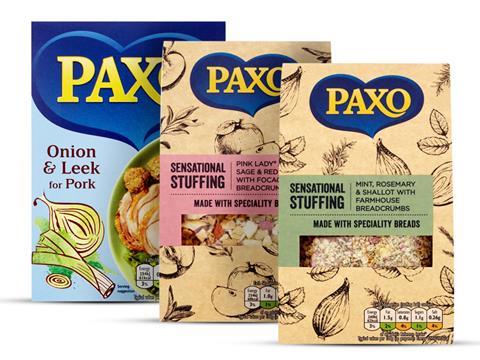 Premier Foods hopes to add value to the stuffing sector as it boosts its Paxo range with a new premium selection, a refresh of the core line-up, and the launch of the brand’s “biggest media investment since the early 1990s”.

Joining Paxo’s portfolio of stuffing mixes is a four-strong range made with speciality breads including focaccia and sourdough. Sensational Stuffing comprises Lemon, Rosemary & Thyme with Ciabatta; Pink Lady Apple, Sage & Red Onion with Focaccia; Roasted Garlic, Red Onion & Rosemary with Sourdough; and Rosemary, Mint & Shallot with Farmhouse Breadcrumbs (rsp: £1.89/110g). It had been created in the hope consumers would trade up and drive value into the category, said Premier.

The Paxo core range has also been given attention, with the addition of three flavours alongside a packaging revamp. The new variants are matched to specific meats, coming in Mushroom & Onion for Beef; Onion & Leek for Pork; and Garlic & Thyme for Chicken variants (rsp: £1.19/190g). Each pack has a different colour to signpost the meat: red for beef, blue for pork and yellow for chicken.

Only 12% of roast dinners include stuffing [Kantar Worldpanel 52 w/e 31 January 2016] but Premier hoped to “significantly” increase the number of occasions over the next five years through investment including Paxo’s largest media spend in about 25 years, said Helen Touchais, brand director for flavouring & seasonings. Premier would not disclose the actual figure.