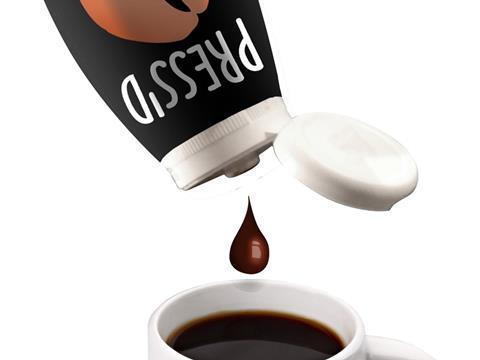 A liquid coffee concentrate sold in a water enhancer-style format has secured its first retail listings.

Press’d, which is sold in a squeezable pack containing sufficient concentrate to make 16 cups of coffee, is rolling out next month to Whole Foods Market in August and has confirmed listings at retailers including Ocado and Planet Organic. It is made with 100% arabica beans and is available in three varieties: Original Colombian, caramel and vanilla (rsp: £2.99).

Press’d coffee is produced by US beverage concentrate manufacturer DreamPak and is the brainchild of director Sara Gamay, who felt there was a gap in the UK market for good quality, convenient coffee. “Press’d is inspired by all of the active, on-the-go Londoners who love great coffee but are pressed for time,” she said. “No one should have to settle for a bad cup of instant coffee just because they are on-the-go.” The launch taps the trend for portable super-concentrated drinks such as Britvics Robinson’s Squash’d water enhancers and Teisseire coffee flavourings.

“Press’d offers a genuinely innovative solution that delivers on convenience and taste,” said Gamay, adding the “smooth and consistent” taste of Press’d was the result a patented low-temperature brew method. Press’d made its debut at the London Coffee Festival in April and is available from wholesalers Marigold and will be listed with Tree of Life and Suma in September.