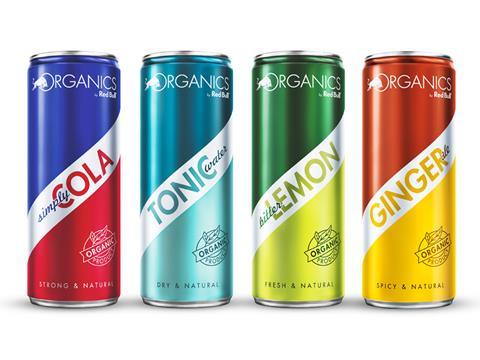 Red Bull is to make its first move beyond energy drinks, taking on the likes of Fever-Tree in the posh mixers market.

Organics by Red Bull will roll out from late June “following six years of consecutive organic food and drink growth in the UK”.

Packed in a slimline 250ml can, Simply Cola, Bitter Lemon, Ginger Ale and Tonic Water (rsp: £1.29) are made with ingredients “from 100% natural sources”.

The new range would appeal to Red Bull drinkers and “shoppers who love the Red Bull brand but don’t consume energy drinks” said the brand. It would also add value to the soft drinks category given “81.2% of fmcg shoppers bought organic at least once last year, paying on average a third more for an organic food association”.

The UK debut of Organics by Red Bull follows a successful rollout in Austria. It comes as the UK energy market is seeing sales fall for the first time in at least five years. Its value has slipped by 3.7% to £227.7m [Kantar Worldpanel 52 w/e 25 February 2018] as the result of health concerns about sugar and caffeine.

Red Bull’s move into mixers was not entirely surprising, said Elliot Wilson of The Cabinet agency. The brand had “played in the mixers market since it launched” having become “closely associated with vodka sales in the on trade”. Organics could appeal to consumers who wanted a “high-energy, modern, younger take on their mixers” than the likes of Fever-Tree, he added.

The Brand Nursery’s Chris Blythe said there was “certainly a logic” to Red Bull moving “beyond the sector that it dominates, but which may be about to decline dramatically”.