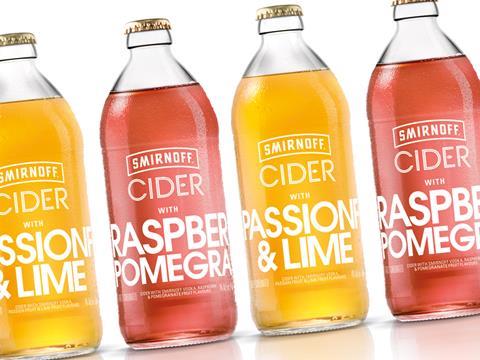 Diageo is expanding Smirnoff into the cider category for the first time with the launch of two fruit-flavoured drinks.

Rolling out across the major mults from today (13 June), the ‘lightly fizzed’ Passionfruit & Lime and Raspberry & Pomegranate variants are a blend of cider, fruit flavours and Smirnoff vodka.

Positioned as ideal for casual get-togethers, the NPD has a 4% abv, and comes in a ‘disruptive’ clear glass bottle – meant to convey the ‘crisp, clean’ liquid – with a crown cap and an rsp of £2.29. A PMP for £1.99 is also available.

The launch – focused on drinkers aged 18 to 25 – is set to be supported by a targeted out-of-home, digital and social media campaign from August.

The strength of the Smirnoff name will take cider “to the next level”, claimed said Claire O’Neill, innovation commercialisation manager at Diageo GB, noting the number of innovations into the fruit cider category over the past few years.

“As the market continues to grow, we still see that there is potential to grow the category even further,” she said.