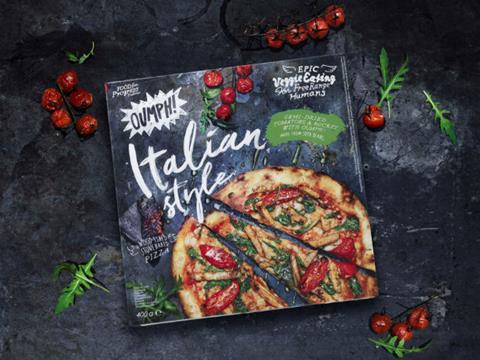 Swedish meat alternative brand Oumph is to broaden its UK presence with a vegan pizza.

It is due to go on sale in 179 Tesco stores, while the brand will also launch plant-based bacon alternative Oumph Salty & Smoky (rsp: £3.49/280g) alongside the rest of the Oumph range in the freezer aisle.

“There is an increasing demand for plant-based options but, often, we just don’t have time to cook. This is when we need good, fast food that tastes great.”

Oumph’s pizza created a buzz in February upon launch in Scandinavia, selling out within days in Sweden and Iceland due to “overwhelming demand”.

The brand made its UK debut in Tesco earlier this year, gaining listings for three of its 10 meat alternatives. Kebab Spiced, Pulled and Chunk variants went on sale in freezers in March as part of Tesco director of plant based innovation Derek Sarno’s push to offer a wider variety of plant-based options.