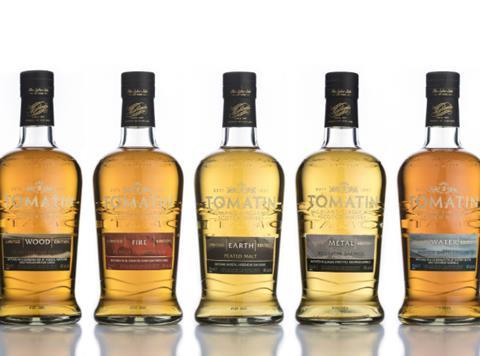 Named after the natural elements of wood, fire, earth, metal and water, each 46% abv whisky has a run of 6,000 bottles and promises a “distinct complexity and character”.

Rolling out now are Wood – aged in French, American and Hungarian oak casks – and Fire, which is matured in heavily charred oak (rsp: £49.99/70cl).

The rest of the lineup is set to released later this year. Earth exhibits “rich and intense” peaty flavours, while Metal is matured in first-fill bourbon barrels and is named in recognition of the distillery’s 12 copper stills. Water is a nod to the soft water from the Alt-na-Frith burn.

The quintet comes packed in sleeves designed by artist Eva Ullrich to represent the elements and the complexities within the different distillations.

Tomatin was “increasingly inspired by global concepts”, and Five Virtues was born out of that, said marketing manager Jennifer Masson. “We wanted to release a creative limited edition series focusing on the effects of different cask maturations, while linking it to a wider concept.”