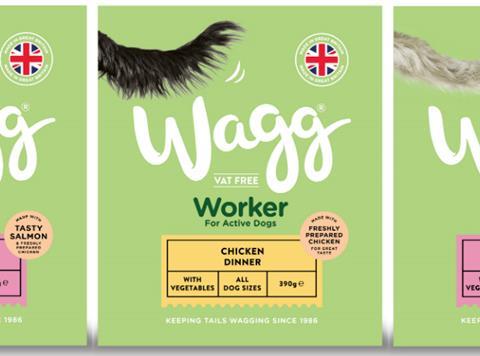 Inspired Pet Nutrition has taken its Wagg brand into wet food for the first time, with a four-strong range.

Part of the Wagg Worker lineup for working dogs, the new meals in a tray format come in salmon, chicken, beef and turkey (rsp: 90p/390g). The first three variants landed on shelf in Morrisons this week, while further listings in the multiples are expected, along with a rollout to specialist pet retailers.

Like all food products for working dogs, the latest Worker SKUs are zero-rated for VAT – unlike standard dogfood, which is standard rated.

They were created to “grab a slice of the UK’s fast-growing wet dogfood sector” said IPN, which saw the value of Wagg’s dry portfolio slip 2.6% last year in the mults [Nielsen 52 w/e 8 September 2018].

The brand’s first wet meals were the “result of both innovation and manufacturing expertise, combined with probably the most well-invested petfood business in the UK” said IPN marketing director Chris Wragg.

Having invested around £14m in new facilities in North Wales, the independent supplier had expanded “the Wagg proposition of ‘no nonsense, great quality and value’ into the fast-growing tray sector of the wet market” Wragg added.

The NPD comes after IPN unveiled Amazon Dash buttons for its Wagg and Harringtons brands in October in an effort to make online shopping “even more convenient”.