Walkers teams with Heinz for crisps range inspired by sarnies 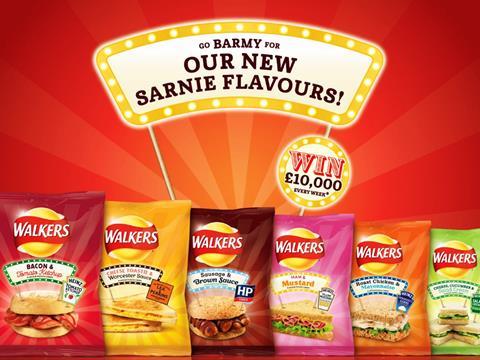 Walkers and Heinz have teamed up to launch six limited-edition sandwich-inspired crisp flavours, which will be driven by an on-pack promotion from the bagged snacks giant.

Rolling out from the second week of August and running for 11 weeks, Go Barmy for a Sarnie will push the new Walkers variants based on Heinz sauces - including Toasted Cheese & Worcester Sauce, Bacon & Ketchup and Cheese, Cucumber & Salad Cream - by giving shoppers the chance to win £10,000 every week.

Sandwich-themed prizes and crisps will also be up for grabs via promotional crisp bags featuring ‘tasty sandwich images’ and the Heinz, HP and Lea & Perrins logos. Packs will be available in 40g and multipack formats (6x25g, 14x25g, 24x25g).

Supporting activity is set to include TV, social media activity and “a unique and exciting experiential activation”, to be unveiled later.

Walkers said the NPD came after the brand identified that 20% of sandwich lunches included crisps.

The new campaign was based on the “importance of sandwiches and snacks to UK consumers”, added Thomas Barkholt, marketing director at Walkers owner PepsiCo.

“Crisps are a regular feature at lunchtime, so we came up with a concept that would incorporate them both,” he said.

Chris Isaac, brand Manager for Heinz Tomato Ketchup, added: “We’re thrilled to be teaming up with Walkers and excited to see our sauces available in a crisp-sandwich format.”