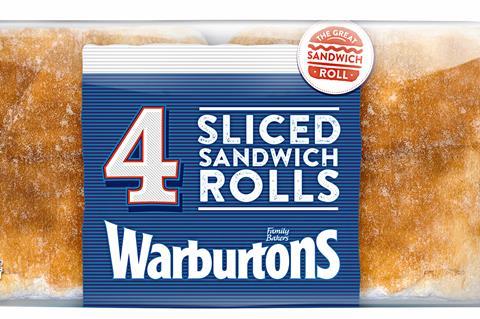 Warburtons has expanded its portfolio with Sliced Sandwich Rolls – a four-pack of square rolls set to roll into Iceland, Asda, Co-op and Morrisons in coming weeks.

The new square rolls were “produced and baked in a distinctive way to give a soft, moist roll with a great texture” said the Bolton bakery giant. “This unique process, coupled with baking on the oven sole, enables a reduced bake time, which results in a roll filled with flavour and texture.”

The innovation comes after lines such as rolls and bagels were the driving force of Warburtons’ sales last year in grocery.

The supplier added 3.4% to its value to £656.5m [Nielsen 52 w/e 30 December 2019], with its category & product strategy controller, Duncan Tyrrell, telling The Grocer: “We’re number one in rolls, crumpets, thins, teacakes and others. Other non-bread wrapped bakery has shifted from 50% to 52% of total unit sales.

“The proportion in our portfolio is not as high, but it’s growing faster than the market average,” he added.