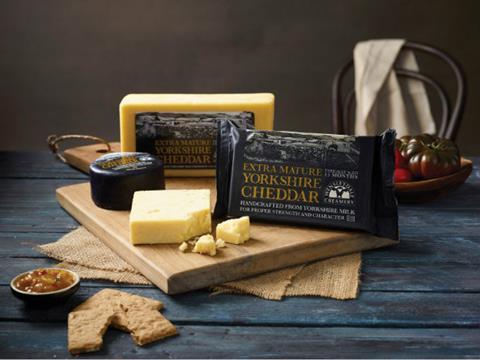 The Wensleydale Creamery has expanded its Yorkshire dairy range with the launch of a first branded cheddar.

Yorkshire Cheddar will go on sale in Morrisons stores across the north of England from 21 May (rsp: £4/320g).

In development since 2011, it will also be available from the Wensleydale visitor centre and independent retailers in a 1.2kg deli truckle (rsp: £12.50), while a 200g pack is also due to go on sale in the coming months.

The brand hopes its 15-month matured cheddar will take a slice of the £1.4bn cheddar market [Kantar Worldpanel, 52 w/e 25 March 2018]. It joins butter, brie, yoghurt and Wensleydale SKUs in the Yorkshire range.

Wensleydale described the cheese as having a “subtle, sweet” flavour with “nutty notes and a savoury finish” as well as slight crystalisation.

Investment in the creamery’s facilities in late 2015 allowed it to begin larger scale production. Wensleydale confirmed it was also in the process of finalising deals with further retailers to stock the cheddar.

“We’re thrilled to be launching Yorkshire Cheddar, made from Yorkshire milk and carefully crafted by our experienced cheesemakers,” said Hartley.

“The ‘Yorkshire’ food brand is fast gaining recognition for its world-class offering - it’s fantastic to be a part of this food movement, and we are particularly proud to be introducing Britain’s favourite cheese to our family, marking a new and exciting stage in our growth.”

It comes amid a host of NPD for the brand, which showcased its summer range of pre-sliced circular cheeses designed for burgers at the Food & Drink Expo last month.