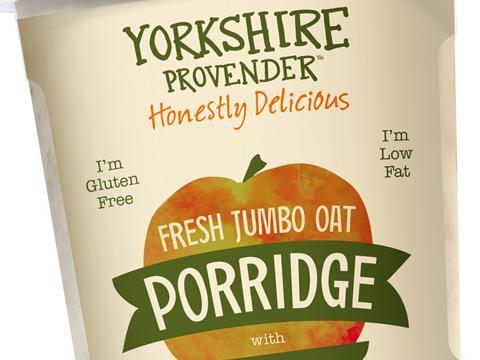 Yorkshire Provender has made its first retail foray outside chilled soup with a gluten-free fresh porridge range it claims to be the first of its kind with no refined sugar.

The trio, available now from Waitrose and Sainsbury’s in an on-the-go pot format, comprises two ‘jumbo oat’ variants - apple and a touch of honey, alongside a dairy-free cranberries porridge made with coconut milk (rsp: £1.79).

Introduced two years after the company launched its first porridge into foodservice, the retail range had been developed to bring much needed innovation to a UK market “flooded with dry and ambient single portion options” said company founder Belinda Williams.

She predicted the porridge would clock up £1m in its first year and said it put the company on track to reach £8.3m in turnover for the year ending March 2017, from £6.5m last year.

“With the growth of fresh breakfast ranges in yoghurt and food-to-go categories, fresh porridge pots offer an ideal product for tapping this opportunity,” she said, adding the launch formed part of a company mission to bring healthy sugar-free breakfasts to families with “minimum fuss”.

Yorkshire Provender is supporting the launch with sampling and social media.