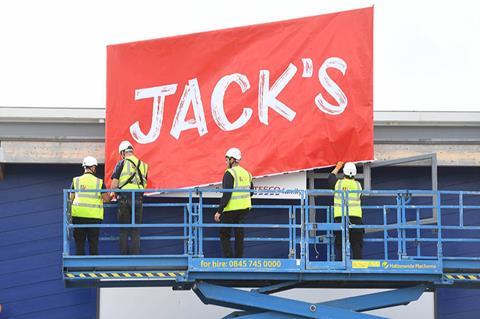 While Dave Lewis may have cracked the multiple format model at Tesco, Jacks has proven a format too far

Verdicts are now in following the announcement of Dave Lewis’ surprise departure from Tesco next year and yes, he’s a genius. As no one knows why he is stepping down, I would suggest that - like Terry Leahy - he is hopping off the bus at the top of the hill. His status as consumer business gold dust can’t be denied, but he will be leaving behind a few headaches for his replacement, Ken Murphy, who will not have the opportunity to tank the share price with forgiveness in the same way.

Lewis’ success was in focusing Tesco back on the domestic business and using data to put the shopper at the heart of the UK model. He wisely turned his back on the vanity of international empire building, and reinforced the multi-format nature of Tesco’s offer. Booker took everyone by surprise but the sense of it dawned on the same day. What I liked most of all was that he simplified the supplier engagement terms and, along with Jason Tarry, brought back supplier trust that had long since gone, along with many shoppers. I just hope this is not undone by the Carrefour alliance cranking up threats over the next couple of months, or suppliers will be back in self-preservation mode.

Ken Murphy has big shoes to fill – but is Tesco’s new growth strategy up to scratch?

Extra, supers, Metro and Express stores enable the adaptation of priorities to suit the winds of shopper change. However, such channel retailing requires properly playing the game that is required in each format. And while Lewis finally cracked this on convenience, correcting the small stores offer three years back, I think that – one year down the road – Jack’s has proven a format too far.

From a variety of reports, I’m estimating it does about £80k per store per week and I’m afraid it needs double that to sustain. I’ve seen empty aisles and even ambient products covering gaps in the chiller. The Rawtenstall store closure and scaling back of the expansion plans suggests Tesco knows it hasn’t got the formula right. We know that the product comes from main estate suppliers who now must regret running these exclusive products to such a tiny outlet chain; patience is wearing thin now on Jack’s, which needs to go big or go home.

For all the noise and supportive storylines with ‘bad’ reputation repaired and an outlook of optimism, Tesco’s share price has barely moved up from the crashed c£2.25 figure. David Potts, meanwhile, has moved Morrisons forward about 20% over a similar period – and that’s without a kitchen sink crash to rebuild from.

Lewis hands over a solid platform, but this is not a Philip Clarke ‘sit back and enjoy the ride’ moment for Murphy. What to do with the pesky Carrefour alliance and Jack’s suppliers calling for a u-turn? We all understood their strategic necessity to combat discounters, so having failed with Jack’s, where does that leave Tesco vs Aldi and Lidl? A good time to get off the bus while your personal stock is high and the wheels are turning nicely.