Is a cut-throat price war coming to UK razors?

A YouGov survey last year highlighted 40 million Brits subscribe to at least one product or service. Amazon Prime and Netflix are probably the most successful examples, but within staple products it’s also becoming big business.

Take razors. Gillette dominates the global cartridge razor market with a 60% share, but its high price point per blade and huge margins have been catalysts for disrupters such as Dollar Shave Club and Harry’s to offer cheaper and more flexible alternatives. 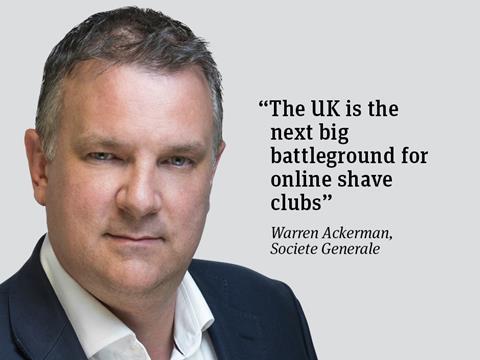 Clever advertising makes millennial hipsters feel they are backing plucky upstarts rather than industry gorillas like Gillette, which has only added to their appeal. However, the fmcg giants are responding. Gillette and Edgewell have established their own online shave clubs, but the seminal moment was in 2016 when Unilever spent more than $1bn buying Dollar Shave Club (then a loss-making business).

The high multiple paid showed it believed subscription models would grow, and that Dollar Shave Club had the potential to be more of a broad-based male grooming brand, potentially with global appeal. However, founder Michael Dubin has admitted there are growing pains getting the wider offer right, and although Unilever can clearly help, a key question will be whether its customers feel it has sold out. Only time will tell.

We see the risk of disruptive replenishment startups potentially spreading to other categories, especially those with relative high value to weight ratios. Categories at risk include dishwasher tablets, laundry capsules, haircare, toothpaste and deodorants. We expect other large brand owners to jump into subscription box models before they are pushed.

The UK is the next big battleground for razor subscriptions. DSC was beaten to the punch by Harry’s, which made a high profile entry a few months ago with massive buzz online, especially on Instagram. We expect DSC to enter the market soon but it may need to find a new name first as the Pound Shave Club is already taken. It should be good news for hard-pressed UK consumers. Maybe rip-off razor prices will finally become cheaper. Ding ding, round two.