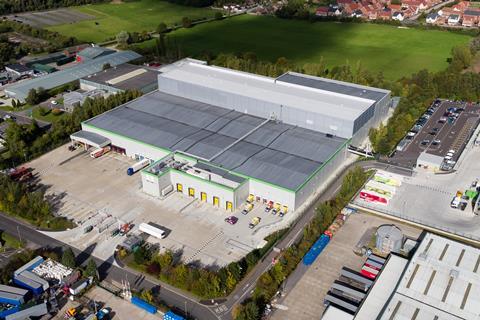 The 240,000 sq ft Andover facility before the fire

Ocado will rebuild its destroyed Andover warehouse at the same site, the retailer confirmed this morning.

“We will be looking to rebuild in Andover,” said chief financial officer Duncan Tatton-Brown, speaking as the business announced its first-quarter results. “The plans for exactly what we will rebuild and the timescales are still being worked on.”

There would be a “state-of-the-art replacement facility that reflects all the innovations and improvements we have made since Andover opened in November 2016,” said Ocado CEO Tim Steiner.

The automated customer fulfilment centre was devastated by a fire that started on 5 February and tore through it over two days.

Revenue grew 11.2% year on year in the quarter ended 3 March but the impact of the fire was equivalent to 1.2% of sales.

Steiner said the timing of the fire, in the last third of the quarter, meant that the impact could rise to 3% over quarter two.

A temporary smaller facility in Andover had been set up to despatch orders picked in Ocado’s CFC in Erith but “every week we’re straining at the seams in terms of capacity”, Tatton-Brown said. “If we weren’t, we’d have been growing faster.”

The automated Erith facility was now processing 37,000 orders a week, up from around 30,000 at the business’s last full-year update to 2 December 2018.

Tatton-Brown also confirmed, as revealed by The Grocer last week, that Ocado’s plans to begin using robot pickers this year had been delayed by the destruction of a prototype in the fire.

Robot pickers are able to handle individual products and pack them into totes. They have the potential to replace humans who work alongside the “swarming robots” that transport packed totes around a grid-like structure in Ocado’s automated CFCs.

“Obviously given the fire we’ve now lost that robot arm,” said Tatton-Brown. “Importantly, everything else around that was retained because all the data and software was held in the computer centre, which was outside the building and therefore has not been affected by the fire.

“We will obviously need to replace that arm in the Erith facility and commission that and get going there. So there will be some delay.”

He said the technology could still be in use by this year but it was no longer “certain”.

Last year Tatton-Brown described the new robots as the technology that would take Ocado’s efficiency “to another level”.

Ocado’s trading statement said a ‘thorough examination’ was being undertaken into the causes of the fire, which started on a section of the grid.

‘Our initial assessment of the reasons for the fire gives us confidence that there are no significant implications for the risk profile of the assets or the viability of our model and therefore for either Ocado Retail or Ocado Group. We will update the market after the conclusion of these investigations.’

Steiner said: “Our first quarter was characterised by continued strong underlying growth in Ocado Retail but also the initial impact of the fire at our CFC in Andover on our headline numbers.

“The fire has been a setback, but it will be only a temporary one. Over the last few weeks, our teams have been working hard to minimise any disruption to our customers.”

Sales growth to £404m was driven by an increasing number of orders per week, up 11.3%, while the average order size decreased by 0.2% during the period.