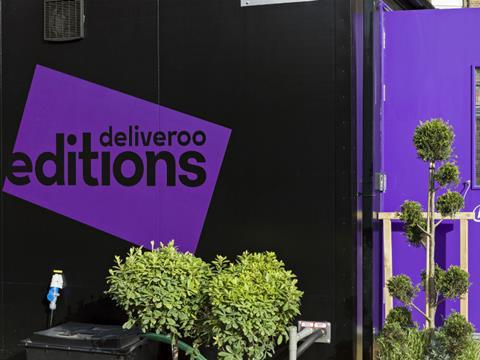 Deliveroo has opened its own kitchens to help the likes of Meat Liquor and Busaba Eathai extend their takeaway businesses nationwide.

More than 200 restaurants have signed up to the Deliveroo Editions programme, which offers third parties access to its 30 new kitchens across the country specifically designed for preparing takeaways.

The programme, which officially launched today, aims to help restaurants broaden their takeaway businesses without the need to shell out for additional physical premises.

Deliveroo will also provide local marketing and fleets of riders to businesses that sign up to the scheme, which expects to generate 1,000 restaurant jobs in its initial phase.

The delivery company selects its restaurant partners based on market analysis that identifies which takeaway options are missing in geographical areas, and potential customer demand.

Its partners include big names such Gourmet Burger Kitchen and Busaba Eathai but also small independents such as Peckham-based pizza company Crust Bros.

The launch comes after Deliveroo “successfully” trialled the concept in the London neighbourhoods of Camberwell, Battersea, Dulwich and Canary Wharf in partnership with eateries including Franco Manca and Motu Indian Kitchen, a takeaway run by Michelin-star restaurateur Karam Sethi.

The UK is the first market to get Deliveroo Editions, but it is set to expand to another five countries by the end of 2017 with a planned launch in Singapore next week.

Deliveroo CEO Will Shu hailed the service as the “biggest development” since the company launched in London over four years ago.

“We worked with a lot of restaurants to increase their revenues and what we thought was, their brands are built on in-house service, and that can get damaged if both in-house and back of house are busy,” he said. “So we thought why not segregate delivery from in house, and then both will run much better?”

“Deliveroo Editions makes good on our promise to widen access to the world’s best food,” Shu added. “By partnering with some of the top restaurants in the business - from unique independents to high-street favourites - we’re ensuring people have access to incredible food on demand.”