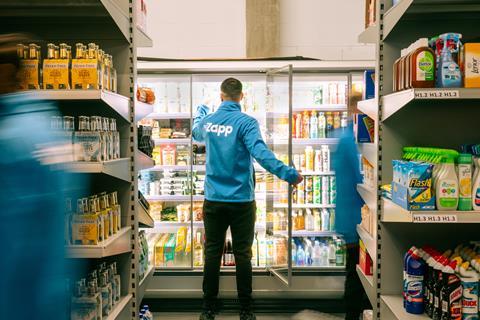 On-demand grocery player Zapp has signed as a sponsor of Chelsea FC, in a deal that includes stadium advertising, player activations and exclusive fan promotions.

The two-year partnership will be supported by the rapid delivery company’s first TV ad which will be shown at half time at a Chelsea home game in the forthcoming Premier League season.

The deal is a significant one for an on-demand grocery brand. Zapp follows in the footsteps of much larger food delivery brands in its sponsorship of football, with Deliveroo official sponsor of England’s football teams and Just Eat competition sponsor of this year’s delayed Euros.

“When we look at prospective partners, we first and foremost look for an overlap of our values – championing diversity, sustainability and obsessing about the perfect delivery. We couldn’t be more proud to be partnering with one of the biggest sports franchises in the world that celebrates our values in such a symbiotic way,” said Steve O’Hear, Zapp’s VP of strategy.

Chelsea FC CEO Guy Laurence said he was “beyond excited” about the partnership.

“The fact Zapp has been able to grow so fast while deeply caring about its values and community made it a very obvious fit for the club,” he added.

The partnership will enable Zapp to stand out from the slew of new rapid grocery players including Gorillas, Getir, Dija, Weezy, Zapp and Fancy which have entered the UK market in the last 12 months.

Zapp operates from dark stores called ‘Zappstores’, supported by an electric fleet of bikes and employed riders, fulfilling orders in minutes, 24 hours a day. Delivery is within 20 minutes and there is no minimum order. A flat delivery fee of £1.99 is charged per order – for orders over £30, the delivery fee is waived.

Like Chelsea, Zapp began in West London but delivers across the capital as well as in Manchester, Paris and Amsterdam, with further expansion planned for the coming months.

Since launching in late 2020, the startup has increased European office headcount to over 240 employees and raised $100m in funding. It is backed by leading investors Lightspeed, Atomico, 468 Capital and Burda, alongside notable angel investors such as former Amazon UK CEO Christopher North.