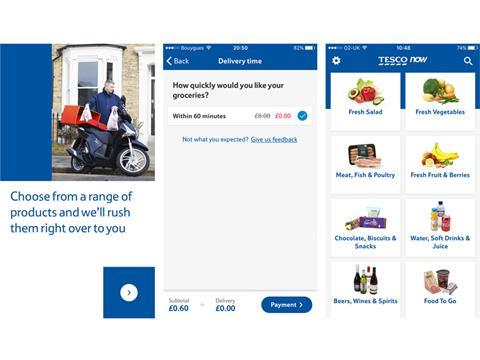 Screenshots from the Tesco Now app

The supermarket is testing the Tesco Now app for customers in zones one and two, offering 60-minute delivery on orders of up to 20 products.

Delivery is supplied by independent courier service Quiqup, which already has deals with companies including Whole Foods, Burger King and Hungryhouse, and is free of charge while the app is in testing phase.

The app, currently only available by invite, was unveiled by money-saving guru Tom Church on his site latestdeals.co.uk yesterday. “I ordered a single bottle of beer and it arrived still cold,” he said.

The Tesco trial comes almost a year after Sainsbury’s launched its one-hour Chop Chop app in Wandsworth last June. Similarly to Tesco Now, the app allows customers to order a maximum of 20 items and uses an external courier service to make the deliveries, which carry a £4.99 charge.

In September, Sainsbury’s extended the service to another 35,699 London postcodes and CEO Mike Coupe said he was “pleasantly surprised” by the level of demand.

Tesco had hinted it would follow in Sainsbury’s footsteps at the IGD Digital conference in October, when online MD Adrian Letts said there was a “huge opportunity” for one-hour or two-hour delivery.

Large retailers appear to be leaning towards third-party partnerships for express deliveries. In April, Ocado revealed it was considering a collaboration with an external service to offer speedier options than its same-day service.

Quiqup already works with a number of food companies including Whole Foods, which contracted it to conduct a picking and delivery service from seven of its London stores in June.

In December, CEO Bassel El Koussa said grocery was “at the forefront” of its ambitions as an express courier service and revealed he was talking to a number of major food retailers, including Tesco. The Tesco venture marks the first time it has guaranteed a one-hour delivery window for a grocery partner.

A Tesco spokeswoman confirmed the supermarket was trialling the one-hour service among a “small number of colleagues and customers”. “We’re always looking at new ways to improve the service we offer our customers,” she said.