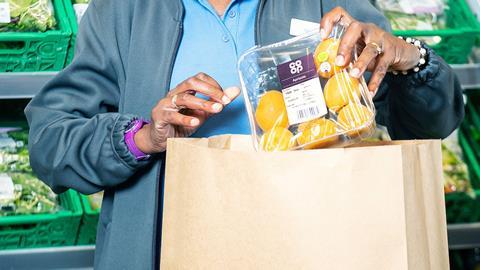 The pros and cons of a Co-op and Amazon partnership. Can they make it work?

Some 10,000 Co-op SKUs are now available on Amazon. But will the venture pay dividends, with Morrisons offering cheaper alternatives?

Co-op and Amazon are hardly obvious bedfellows. One is a local community-minded network of UK stores, owned by millions of members and underpinned by an avowed ethical approach to trading. The other is a global online behemoth whose practices on everything from tax to worker conditions are regularly called into question.

Yet both have high hopes for their online grocery partnership, announced last week. About 10,000 Co-op SKUs are now available to buy on Amazon, giving Prime members the ability to order a basket of goods to arrive the same day, in two-hour scheduled slots.

Although only available in Glasgow and the surrounding area for now, Co-op has a nationwide ambition for the service. “Our commercial strategy is focused on getting closer to where they are to provide what they need, however and wherever they choose to shop with us,” said Co-op Food CEO Jo Whitfield last week.

For Co-op, the tie-up is part of its target to more than double online sales from £70m to £200m by the end of the year, building on existing online services through Deliveroo, its own shop coop.co.uk, and robot deliveries with Starship.

For Amazon, it’s another step closer to realising its long-term grocery ambitions.

But with their arguably mismatched brand images, who will the tie-up appeal to? And what are the potential benefits to each business?

Amazon has made no secret of its desire to become a grocery destination. That strategy has already seen it link up with Morrisons and Booths – and Co-op is a particularly welcome addition as a convenience retailer. Not only does it give Amazon access to stores in residential areas, but their proximity to customers means orders can be fulfilled quickly. Orders are picked by Co-op staff and then delivered via Amazon’s pool of gig couriers.

“Co-op is attractive in that it’s very close to the customer,” says Natalie Berg, Amazon expert and founder of consultancy NBK Retail. “Amazon already has lockers in Co-op stores and in the longer term, we could even see this relationship evolve so Co-op potentially handles returns for Amazon.”

Perhaps tellingly, its own Amazon Fresh grocery delivery service is still limited to eight UK cities plus London and parts of the south east, six years after its arrival here in 2016. “At some point Amazon needs to decide whether it wants to be a retailer and competitor to grocers, or be the infrastructure behind them,” says Berg. “I feel it’s possibly more the latter.”

Former Amazon executive Brittain Ladd agrees due to the “challenge associated with scaling the Amazon Fresh brand”, tie-ups such as these will be increasingly attractive to the online giant.

For Co-op, there is arguably more of a reputational risk. As David Sables, CEO of Sentinel Management Consultants, says: “People who really love Co-op typically don’t like Amazon.”

Nevertheless, the deal could eventually give Co-op access to the behemoth’s network of Prime members, thought to top 10 million in the UK. “Co-op will get a bit of a halo effect from a demographic that doesn’t tend to go into their stores, but does use Amazon, and will for pure convenience choose The Co-op’s unique range,” says Sables.

Crucially, that’s without having to make any upfront investment in a delivery network of its own. “It’s a pretty easy way for Co-op to grow its top line,” Sables adds. “They need to be online so it’s basically a pay-as-you-go method of dipping into that market.”

The question is how much of a difference Amazon can make to Co-op’s numbers in practice. Ged Futter, founder of consultancy The Retail Mind, argues it is swimming against the tide. “What we’ve seen over this past month or so is people using online grocery less than last year, not more,” he says. Kantar’s latest figures show just over 20% of the population bought groceries online in the four weeks to 8 August – the lowest level since October 2020.

“Co-op will get a halo effect from a demographic that doesn’t tend to go into their stores, but does use Amazon”

However, there are some benefits to the service that could lure shoppers to online. Co-op says its “ease, speed and convenience” should appeal to the same kind of customer as its Deliveroo service, now available from more than 400 stores.

One key difference is that, although Deliveroo is faster (as little as 15 minutes), Amazon’s same-day delivery (it arrived at our shopper’s door in three hours) offers a wider range.

Having said that, Co-op is sharing a platform with Morrisons, which also has a wide range. So for particularly thrifty consumers, Co-op may not be the obvious choice. Our mystery shopper paid £3 for a 225g punnet of blueberries, for example – at Morrisons, that would have bought 325g.

Sables believes this could be a problem. “Morrisons has better pricing,” he says. “It also has a very good provenance aspect. It all plays in the favour of people selecting Morrisons.”

The mult is also more likely to attract bigger baskets. Despite Co-op saying Amazon customers will be able to do a “full grocery shop”, it is predominantly a top-up destination. And the online top-up market is still relatively small, argues Futter.

Ultimately, analysts doubt the partnership will be a game-changer. Sables is dubious the nationwide rollout will happen. “There will be an order threshold they have to reach in Glasgow and I can easily see it not doing that,” he says.

Meanwhile, Futter believes “it will be a ‘nice to have’ but won’t fundamentally change the Co-op‘s numbers”.

So while it may be a big step forward for both partners strategically – it may prove a smaller step in commercial terms. 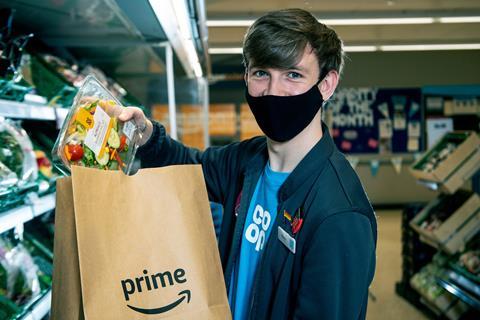 Our shopper found it “generally easy” but a point was lost because a search for nappy cream led away from Co-op’s range. “It was a bulk purchase, to be paid separately and a delivery time of three to five days. This was annoying and time consuming.”

“If it had been my regular shop then I probably would have just used another supermarket seeing that the selection appeared to be limited – particularly the wines.”

The first available slot was 12 noon-2pm.

“The delivery driver was pleasant and helpful. The goods were delivered in brown paper bags.”

“I would use the service again if I needed a same-day delivery. But if I could wait, I would use a supermarket with a wider selection.”