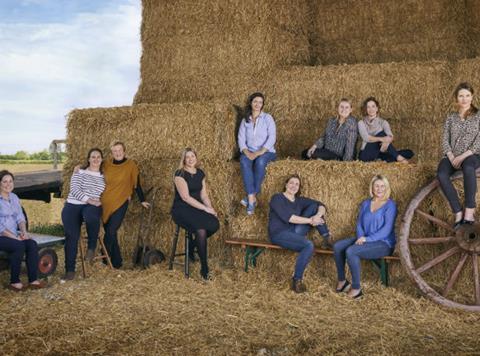 Ten of the most prominent women business leaders in food and agriculture have been celebrated in a new portrait by leading photographer Jenny Lewis.

The all-female shot was commissioned by the East of England Co-op to mark the 10th anniversary of its Sourced Locally initiative, which focuses on local produce to shoppers.

It said the portrait celebrated women who were helping to lead the future of food and drink production.

The retailer pointed to a recent study by HR magazine, which showed women accounted for 30% of the food and drink manufacturing workforce in the UK.

Award-winning Jenny Lewis is best known for her One Day Young project, which captures mothers within the first 24 hours since having a baby. She has also photographed of a host of well-known women, including Dame Maggie Smith, Keira Knightley, Celia Imrie and Naomi Harris.

The image was taken at Lane Farm in Suffolk, and showcases the 10 women in a traditional barn amid the Suffolk landscape.

Minnie Moll, joint chief executive at the East of England Co-op, said: “Over the last decade, the East of England Co-op has brought a huge variety of quality local produce to our customers, generating millions of pounds for our economy. The 10 women in this photo and hundreds of other fantastic local producers in East Anglia making great-tasting food and drink are the people making this happen.”