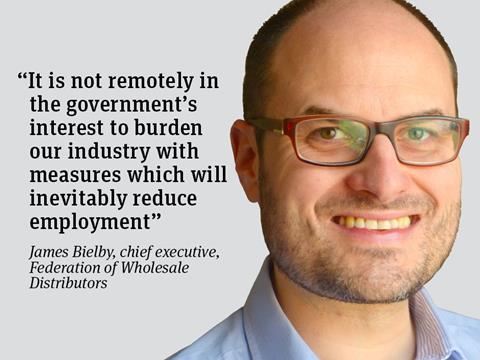 FWD members’ annual wage costs will rise by 0.7% this week as the national living wage, which directly affects 30% of their employees, comes into effect. Anyone with an appreciation of wholesalers’ margins will recognise that bottom-line costs like this are not easily absorbed, but many will absorb them, because if anyone is hit harder than wholesalers by this wage bill increase it’s the 72,000 retailers our members supply and support.

Maintaining pay differentials between staff on the NLW and those above it will escalate costs further. This will inevitably mean savings elsewhere - cutting non-statutory benefits, for example - as well as reduced profitability.

FWD wholesalers employ 70,000 people and contribute £480m in direct taxation each year to the Chancellor’s coffers. They support over a million jobs up and down the supply chain, spread employment evenly throughout the UK, and run operations as leanly as is possible in a low-margin, large workforce industry. The NLW will hit them hard. One FWD member estimates the additional cost will be equal to its total profit last year.

It’s what happens next that concerns us even more deeply. George Osborne’s aspiration is for the NLW to reach 60% of median earnings by 2020 - which could be as much as £9.30 an hour.

FWD recently commissioned research on the full impact of NLW rises on our members. For most, the 2020 aspiration would be a huge and unmanageable cost, adding as much as 3.7% to expected wage costs had the national minimum wage risen at its historical rate. That would leave them looking for an extra £59.3m over four years just to maintain current staffing levels and service to customers. It is not remotely in the government’s interest to burden such a vital industry with measures that will inevitably reduce employment, decrease tax receipts and force cost increases on to consumers.

Osborne has gone too far in the burden NLW will put on business. Backing down from grand announcements for the Tory faithful has become something of a habit: tax credits, deficit reduction and disability cuts have all laid aside. Our own industry did its bit to undermine his ambitions with its successful opposition to his proposals for Sunday trading. So restricting NLW rises to levels that won’t cost jobs is an achievable goal.

FWD is co-ordinating a coalition of industries faced with the same concerns should NLW go above £9 by 2020. Given the impact on businesses it’s important to fight for a slower rate of increase and for an independent Low Pay Commission to be allowed to do the job it was set up to do: consider the facts about increasing wage levels, rather than having politically motivated numbers forced upon them.

The FWD builds its lobbying efforts on evidence, working with wide and deep coalitions, and putting forward viable alternatives. In this case, we are doing all three. That’s why we are confident Osborne will listen to business and extend the 2020 deadline for his 60% target. As he fights to keep his ambition of moving to No 10 alive, he’ll need all the friends he can get.

James Bielby is chief executive of the FWD