Ingrid Newkirk: the animal advocate who won't give up 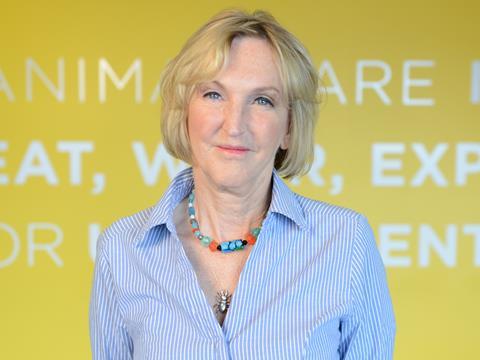 I had a Danish blue a couple of weeks ago, which is my favourite in the world and I haven’t had one for years,” grins Ingrid Newkirk, pushing a platter of vegan cheeses, chutney and crackers toward me. The PETA founder is waxing lyrical about “out of this world” caviar cooked up from seaweed and “lovely” faux gras (“it wasn’t exactly health food, but it was healthier for the duck”) so convincingly I almost forget I’m tucking into activated nut cultures on a cracker rather than a dollop of actual cheese.

“It’s certainly very different from the early days,” she laughs. “We used to get soy powder and mix it with water to make soya milk, and there wasn’t scrambled mix for eggs. As a non-cook that was extremely painful. Now you just walk into a shop and you get fake chicken, fake bacon, and what, three fish & chip shops are now serving vegan fish. Vegan fish & chips with mushy peas - what more could you ask for?”

What did you do before setting up PETA? I studied to be a stockbroker. Then my neighbours moved away and left their cats behind so I took them to the shelter and saw how the animals were treated. They had a job posted there so I begged to do it

What’s the best piece of advice you could share? I believe people undervalue their ability to change other people and are hesitant to pass on information they had that’s very valuable to others. I’m very grateful to everybody that taught me something about animals or the world so I could become a more conscientious consumer so I always advocate that people use their voices

Any mistakes? You learn things that you could’ve done better. But as long as you’re honest and you’re trying to accomplish something you’ll always be able to influence somebody

PETA’s biggest achievement so far: We eradicated crash tests with baboons and pigs

How do you relax? Funny movies and I like to do the Guardian crossword. I like F1 racing, too

Any good films recently? The Lobster. It’s so cleverly written and the acting is superb.

Favourite meal: I like a Wellington. Beautifully made flaky pastry with potatoes, carrots, artichokes and chestnuts in it, and a beautiful pickle

However you feel about PETA, the world’s biggest animal rights group, or its controversial founder (Newkirk’s will requests that her corpse be barbecued and her skin made into leather wallets to draw attention to the plight of animals), plenty of Brits agree with them. Meat-free products raked in an extra £17.2m in the past year, a growth of 7% year-on-year, with 542,000 now ditching animal products altogether to go vegan, a 360% increase in the past decade.

Quite simply, Newkirk believes young people get it. “The generations that are growing up don’t want to be unkind to animals, they are environmentally conscious and we have a wealth of health knowledge now. If people are out of breath or overweight they’re hearing you shouldn’t have meat or dairy.”

Many of these are flexitarians though. Isn’t that a step in the wrong direction? “From the animal’s perspective, it’s fabulous,” she insists. “You eat five chickens instead of 10, so five chickens say ‘thank you’. And, of course, our primary interest is stopping the suffering so for us it’s tremendous. We just hope and encourage people and provide whatever we can so they keep going.”

It isn’t only consumers tentatively experimenting with Veganuary or Meat Free Mondays that PETA is nudging towards its way of thinking. From Unilever to Pret a Manger to Sainsbury’s it’s worked with a long list of grocery clients looking to cash in on “trendy” veganism too. “It’s often a test,” she adds. “Sainsbury’s did a test of vegan cheese and then thought ‘Good god, it’s flying off the shelves’.”

Sainsbury’s five coconut milk-based cheeses exceeded expected sales by 300%. “It’s great because what you see before your very eyes is the evolution of the marketplace. Yes they’re all companies that do things for ethical reasons, but their bottom line is the business, the shareholders. So it’s marvellous to see you can make a financial argument for them to provide vegan foods.”

Not everyone is convinced of the merits of veganism. Only last week, claims that vegan diets could have ‘devastating’ impacts on kids hit the headlines. Newkirk’s expression darkens when I bring it up.

“That was outrageous,” she says. “It’s such shoddy journalism, it’s not journalism, it’s a scare tactic. A meat and dairy diet from a health perspective is just a dangerous diet, without question. According to every medical study, it leads to heart diseases and cancers, stroke and high blood pressure. That’s the dangerous diet. If you take those out what are you going to eat? You could eat some vegan sweets and chips and then, yes, you’d be in trouble as you wouldn’t have minerals. But all the green, leafy, vegetables, all the nuts and fruit are full of everything from protein to minerals to vitamins.”

Claims that our new appetite for soya milk and veggie sausages are responsible for increased deforestation and environmental degradation are dismissed by her just as quickly. “Half a fact floats around and becomes a thing,” she sighs. “Most soy is grown as animal feed and that’s a problem. There wouldn’t be a problem environmentally with growing soy if it was for human consumption because the need to grow so much would shrink enormously. So meat eaters are far more responsible for not only slaughtering cattle but for also growing vast amounts of unnecessary soy.”

Comments like that - and ongoing undercover investigations into the UK industry leading to the publication of some seriously grisly footage - don’t engender warm feelings toward Newkirk and her organisation from meat and dairy producers. “It’s not a friendly relationship,” she admits. “We’re willing to work with anybody but really our goal is to abolish all the cruelty by just moving away from these things. We expose to the consumer what they’re paying for. To them it might just be a chunk of cheese but we say please allow us to show you what you’re actually paying for, which is pain and suffering.”

In other words, she wants the multibillion-pound meat and dairy industry dead and buried. Animal welfare is as bad as it ever was, she insists, and any accreditation or labelling schemes, such as ‘free range’ or ‘Red Tractor’ are merely “humane washing” in her view. “We caution consumers very strongly that they shouldn’t be taken in by it. If you haven’t been to the farm and seen how the animals are trapped, raised and killed, and aren’t satisfied it’s humane, then don’t buy it.”

“Grown-ups should grasp that there isn’t a dancing piggy in an apron joyfully jigging to market. It’s a real living being with feelings, who is frightened and being loaded on a truck”

Even “standard agricultural practice” includes “grinding up babies” after all, her colleague points out, as the egg industry routinely discards male chicks.

Newkirk nods. “And it’s not just chickens either. I have hours and hours of footage from dairy farm after dairy farm, and this is standard, of the baby calf being taken away and the big lumbering mother just following that child and crying out. Every time she gives birth that happens so her milk can become cheese for a pizza topping or some rubbish.

“And the cows are raped, there’s artificial insemination. A man’s hand is shoved into their rectum to locate their uterus and a rod is bunged down their vagina.”

It’s hard stuff to listen to. “But it’s reality,” she insists. “Some say ‘it’s so gory, don’t talk about it’. But people don’t see it because they aren’t there when it happens. And nobody tells them about it, so we have the delightful job of being able to graphically describe to everybody what they’re actually paying for.

“We’re mostly talking to grown-ups and grown-ups should grasp that there isn’t a dancing piggy in an apron joyfully jigging to market. It’s a real living being with feelings, who is frightened and being loaded on a truck. If it’s not so bad, you can hear it. And if it is so bad, then stop supporting it.”