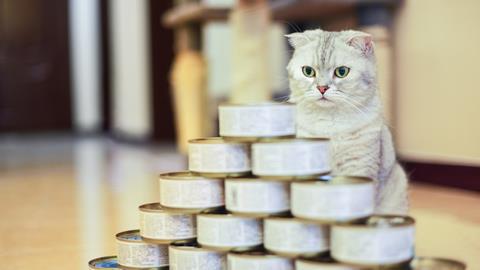 It’s a fine time to be a cat. You don’t know what ‘Brexit’ means, the nights are long and you are more likely than ever to be eating premium catfood. The only downside: your food may contain illegally caught fish. Well, that and the cat litter shortage.

While consumer awareness of food provenance has pushed retailers to provide sustainability guarantees on many of their human product lines, the same standards are often not applied to petfood.

Which means it runs the risk of including illegally caught and endangered fish, new shadow environment secretary Luke Pollard warned this week as he called for origin labelling on petfood products.

In recent years, retailers have stepped up efforts to try and prevent threatened fish stocks from reaching their shelves. But it’s a tricky battle, with unsustainably caught yellowfin tuna and Atlantic mackerel among others still suspected of permeating supply chains.

That’s largely due to the complexity of fish supply chains, which makes comprehensive oversight difficult. Illegal fishing is rife in many parts of the world, with offenders often ‘laundering’ illicit catch by passing it to legitimate boats before they reach shore.

“Pet owners need to know what the fish is, who caught it, by what method and where.”

Although petfood is usually produced from the scraps of human production, the threat remains - but without the labelling guarantees. Few additional fish are caught specifically for catfood, but critics say it may still fund environmentally destructive practices.

“In some parts of the world where British catfood is made, there is very little monitoring and enforcement of fishery regulations,” says Terri Portmann, a marine consultant. “So even if the tin tells us there is tuna in it, we can take little comfort that the fish is sustainably sourced or legally caught.

“Pet owners need to know what the fish is, who caught it, by what method and where.”

The inclusion of tuna and mackerel in catfood is seen as particularly troubling given the two species’ vulnerable status. Despite being a premium product for humans, tuna remains prolific in catfood. It is found in a quarter of supermarket own-brand products and makes up more than a half of some cans’ contents, our analysis suggests.

Guy Blaskey, founder of newly launched catfood brand Purr & Miaow, says many brands are unlikely to know the true origin of their fish.

“It relies on trust in the supply chain,” he says. “You buy from your supplier and trust that they have bought from good suppliers, and so on.”

The Marine Stewardship Council looks to solve the problem by certifying products that can provide full traceability for each step in the supply chain.

MSC-certified petfood products have doubled in the past five years as brands look to reassure customers that their fish is sustainably caught.

Loren Hiller, MSC commercial officer, believes the growth is customer driven. “Customers are paying more attention to the food they’re eating so expect them to be doing the same for their pets,” she says.

Should petfood have MSC certification?

Asda, Co-op, Morrisons and Aldi are all now MSC-certified for a selection of products. However, the majority of catfood lines remain uncertified. Our analysis of own-brand cans on supermarket shelves showed just nine of 84 products carry the MSC label.

The lack of customer assurances on petfood is a problem retailers have long recognised. In 2015, members of the Sustainable Seafood Coalition, including Tesco and Sainsbury’s, pledged to include sourcing information on all petfood products within two years. But five years later that commitment remains unmet.

“We work hard to ensure that our seafood is sourced responsibly with respect for the environment and people,” says a Tesco spokesman. “We were named MSC’s supermarket of the year 2019 and are working with the industry to ensure that our sustainable seafood offer continues to improve, including petfood.”

Better labelling will not be a panacea for ending illegal fishing. But with consumers’ environmental concerns continuing to grow, expect calls for greater assurances to become ever louder.